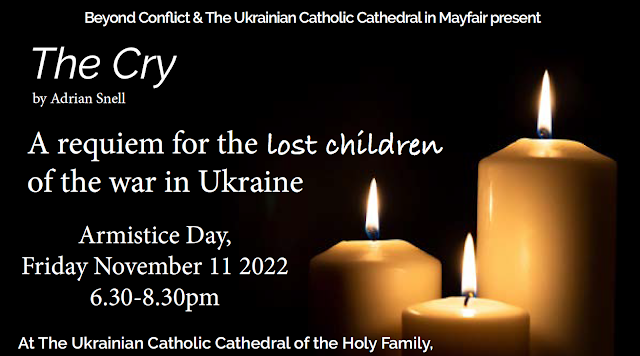 The Cry: a requiem for the lost children in war by Adrian Snell is being performed by London Oriana Choir and Alleyn’s School Choir, conductor Dominic Ellis-Peckham with soloist Katy Treharne, as part of a fundraising event on Armistice Day, 11/11/2022, at the Ukrainian Catholic Cathedral of the Holy Family, Duke Street, London, W1K 5BQ.

The event is being organised by Beyond Conflict, the mental health charity for victims of conflict, in collaboration with the cathedral to raise funds for trauma counselling for children and mothers on the frontline, supported Beyond Conflict, and for The Ukrainian Welcome Centre in London for displaced Ukrainians who fled the war.

The concert will also include Ukrainian music performed by members of the Ukrainian community.

Composer/singer-songwriter Adrian Snell’s The Cry was premiered in 2008 at St Paul’s Cathedral, followed by performances at Salisbury Cathedral and St George’s Chapel, Windsor.