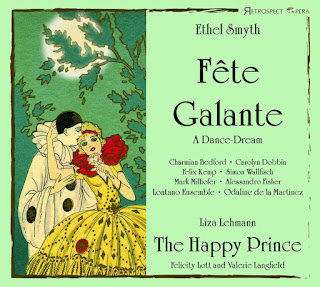 The First World War had a devastating effect on Ethel Smyth’s operatic career. Though English born (her father was a General), she was German trained and much of her musical career was focused on Europe, at the time hostilities were declared she had a number of major European performances lined up for her operas. These, of course, never happened. Smyth would continue to write operas, but her career refocused on Britain, and she never again returned to the large-scale romantic opera of The Wreckers (1902-4). In fact, she had already moved to other types of opera and in 1913 and 1914 had written a two-act comedy The Boatswain’s Mate.

Whilst hardly well-known, Smyth’s opera The Wreckers is available on disc and does achieve occasional performances, and chamber versions of The Boatswain’s Mate are becoming increasingly common. But we have little knowledge of much else of Smyth’s later, post-World War One output. Neither of her final operas Fete Galante (1921-22) and Entente Cordiale (1923) is well-known, nor is her oratorio The Prison (1929-30). But things are beginning to change, an American group has successfully crowdfunded a recording of The Prison, and now Retrospect Opera, having recorded The Boatswain’s Mate [see my review], has committed Fete Galante to disc.

The new recording of Ethel Smyth’s Fete Galante on Retrospect Opera features the Lontano Ensemble, conducted by Odaline de la Martinez with Charmian Bedford as Columbine, Carolyn Dobbin as The Queen, Felix Kemp as Pierrot, Simon Wallfisch as The King, Mark Milhofer as The Lover and Alessandro Fisher as Harlequin. The disc also features Liza Lehmann’s The Happy Prince for reciter (Felicity Lott) and piano (Valerie Langfield), plus three short orchestral excerpts from Smyth’s operas recorded in 1939 by Adrian Boult and the Light Orchestra.

Smyth called Fete Galante a Dance-Dream in One Act and it uses a libretto by Edward Shanks based on a tiny (seven pages) short story by Smyth’s friend Maurice Baring. The work was premiered in 1923, with Sir Thomas Beecham conducting his recently formed (and short-lived) British National Opera Company. Smyth would create an orchestra suite from it in 1924, and expand it as a ballet (1932) with designs by Vanessa Bell!

On this disc we get the original operatic version, with the smaller of Smyth’s two available orchestrations. But even in this version it is clear that Smyth expected the work to be a synthesis of singing, dance and the visual arts. The story itself is artful in the extreme. It takes place in a ‘moon-lit Watteau garden’ with the familiar commedia dell’arte characters Harlequin, Pierrot and Columbine. This latter pair are in love. When Columbine witnesses the Queen embracing Pierrot (in fact it is the Lover dressed as Pierrot), the ensuing drama moves into darker territory as we learn that Pierrot has always loved the Queen, and though the King believes (correctly) that the person embracing the Queen was not in fact Pierro, Pierrot, who knows the identity of the Lover, stays silent. The dance goes on, as Pierrot stabs himself.

If you listened to this disc cold you might at first struggle to work out who the composer is. The music is clearly English, and perhaps somewhat old-fashioned. At the time of writing Fete Galante Smyth was 65. Some 14 years older then RVW, 10 years younger than Hubert Parry and six years younger than Stanford, she had much in common with the two older composers (by 1923, Parry had died and Stanford was no longer active), and little in common with the younger. German trained with a background which included friendship with Mendelssohn’s family, her musical background was linked to a different age. Not unlike Delius (another composer championed by Beecham), Smyth was effectively musically rootless, with few links to British musical culture or to the post-war Germany.

For Fete Galante, Smyth uses the Watteau-esque setting to explore a music neo-classicism which, though a long way from Stravinsky’s Pulcinella (1920), seems to betake of the same idea to move away from the large-scale Romantic approach. The use of puppets and the idea that they can suffer is also a thread in the opera, at one point Columbine says ‘See how a doll can suffer! Ah, What bravery in a puppet’s part’, which give an intriguing link to another Stravinsky ballet-score, Petrushka!

The opera starts with a sarabande and a musette, and the sense of older classical forms is never far away in the piece. I rather like the way Smyth’s instrumental lines seems to weave their way round the voices, something emphasised by the small-scale orchestration. Smyth uses this to set up an artificial atmosphere populated by characters whom we discover to have real emotions. This is not a game, and Smyth’s music makes the successful transition into seriousness without ever losing the neo-Classical atmosphere.

No, the opera does not break any major new ground and yes, Smyth’s style can seem somewhat old-fashioned for 1923. But if we can stop comparing her to younger colleagues, then the piece shows a composer re-inventing herself, exploring a new style of chamber opera to create a highly sophisticated entertainment. The result is 45 minutes in a sound-world where the composer is clear what she wants to achieve, and both charms and seduces.

The opera is well served by the young cast who bring a nice effortlessness to their roles and the way voices and instruments interact. Felix Kemp makes a very appealing and affecting Pierrot who goes to his death gladly and lyrically, with Simon Wallfisch as the noble and honourable King trying to get to the bottom of the information. Charmian Bedford flits in and out charmingly as Columbine, whilst Mark Milhofer and Carolyn Dobbin are the real lovers.

Occasionally, I feel the recording has caught the voices a bit too close so that the odd intrusive vibrato appears. But overall this is an admirable enterprise which has dusted off an archive curiosity and shown it to be vibrant theatrical piece, in which Smyth certainly shows no sign of repeating herself. We must give grateful thanks to Odaline de la Martinez and Retrospect Opera for their continued championing of Smyth’s music. I understand that there are problems with sources for Entente Cordiale, Smyth’s last opera, yet we must hope that this can be recorded too.

The companion piece on the disc is by Liza Lehmann, perhaps best known for her songs. Here she writes in a rather old-fashioned medium, the melodrama. Oscar Wilde’s story The Happy Prince is beautifully and affectingly read by Dame Felicity Lott whilst Valerie Langfield provides Lehmann’s discreet and pleasantly illustrative accompaniment on the piano.

RETROSPECT OPERA RO007 1CD [76.34]
Support Planet Hugill when you buy this from Amazon.