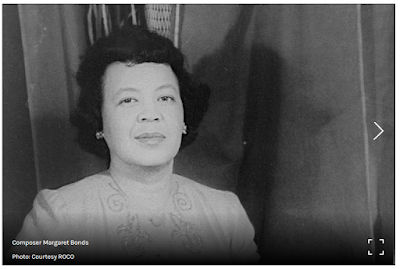 The Houston orchestra will be livestreaming a performance of her music Feb. 4.

It almost sounds like a detective story: a lost recording by a once-prominent African-American composer results in a perfectly timed celebration of her music.

Flash back to 2018, when librarians from the Museum of Fine Arts, Houston’s Hirsch research library were combing through the collections at Rienzi, its house museum devoted to the European decorative arts. The River Oaks-area mansion was once home to Carroll Sterling Masterson and Harris Masterson III, the Houston philanthropists who left Rienzi to the museum when they passed away.

The Mastersons also produced several Broadway plays and musicals in the 1950s and ‘60s, notably the Tony-nominated “Bajour.” Among their massive record collection — dominated by mid-century easy-listening favorites such as Perry Como and Mantovani, as well as an appropriately large number of soundtracks — was an acetate disc wrapped in brown paper, dated from the late ‘60s and with the notation “Margaret Bonds on piano.”

On the disc was a rehearsal for a musical that was never produced. The plot is pretty standard throwaway Broadway fare about a sailor falling in and out of love in New Orleans — “a port-town romance kind of situation,” says MFAH technical services librarian Joel Pelanne. But as it happened, the woman at the piano that day was one of the more remarkable musical figures of the 20th century.

Born in Chicago, Bonds studied with pioneering composer Florence Price in her teens and in 1934 became the first African American to perform with the Chicago Symphony Orchestra. She went on to a fruitful career as both a performer and composer, frequently collaborating with Harlem Renaissance poet Langston Hughes and arranging a series of spirituals, including “He’s Got the Whole World in His Hands,” for star soprano Leontyne Price.

Interest in Bonds has ticked up in the past few years, which have seen the release of at least two major recordings: “Four Women: Music for Solo Piano” in 2018 (Price is also featured); and “Margaret Bonds: The Ballad of the Brown King & Selected Songs” the next year. On Feb. 4, streaming live from the Rienzi, ROCO will present an evening of Bonds’ music featuring pianist Howard Watkins and bass-baritone Timothy Jones.