Behold! the sea itself!
And on its limitless, heaving breast, thy ships:
See! where their white sails, bellying in the wind, speckle the green and blue!

Ralph Vaughan Williams, an aspiring English composer, first became aware of the poetry of Walt Whitman in 1892. Whitman, whose bicentennial is being celebrated across America in 2019, became a touchstone for Williams, who carried a pocket volume of Leaves of Grass through the trenches of World War I. Whitman beautiful verses became a touchstone for Williams, who helped usher in a new era of British choral music after a century of compositions dominated by German influence. Each man was a powerful disruptor, a breath of fresh air for their respective forms of poetry and choral composition. In short, few pairs of artists are better suited to one another. Williams created two choral works from Leaves of Grass, both premiered at the Leeds Festival in 1910: “Toward the Unknown Region and A Sea Symphony.”

Humanist and metaphysical, the sections of Whitman that make up A Sea Symphony describe travel across the ocean as a metaphor for the soul’s journey into the infinite. To capture the majesty of the poetry and “the sea itself,” Williams created a massive work, ringing with the mighty sounds of a symphonic chorus and orchestra. Few truly choral symphonies had been attempted before. The seventy-minute, four-movement piece begins with a fast-paced, booming introduction that immediately situates the audience in the power of the waves. It continues at a variety of tempos and dynamics, incorporating semi-choruses and two soloists — a baritone and a soprano — as it plunges into themes of life, death, and shared humanity.

One critic calls A Sea Symphony “a triumph of instinct over environment. The tone is optimistic, Whitman’s emphasis on the unity of being and the brotherhood of man comes through strongly, and the vitality of the best things in it has proved enduring.”

A Sea Symphony is beloved, influential, and rarely-performed by collegiate ensembles. Bringing the piece to life in Cambridge involves the assembly of a vast armada of musical forces, including all three of the Harvard Choruses (Harvard Glee Club, Harvard-Radcliffe Collegium Musicum, Radcliffe Choral Society), a professional orchestra, and the renowned soloists Winnie Nieh and Dana Whiteside. 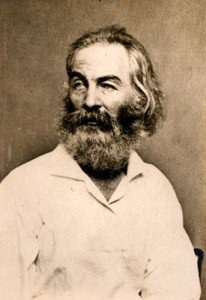 This extraordinary collaboration is made possible by the Barbara Connolly Lewis Memorial Fund. Lewis (1927-1999) sang with the Radcliffe Choral Society in the late 1940s, and was an Assistant Conductor under G. Wallace Woodworth in 1953. After leaving Radcliffe and Harvard, she directed choruses for many organizations, including the Windsor School, the Princeton Society of Musical Amateurs, the Powers Music School, and Boston University, where she also taught conducting in the 1970s. Her love of the major choral works and her commitment to making participation in such works accessible to many led her to found the Belmont Open Readings in 1972, which she conducted until her retirement in 1994. The support of Lewis’ fund has resulted in several extraordinary performances since 2003, including Tippett’s Child of Our Time and Weston’s Griot Legacies.

The concert headlines Harvard University’s 2019 ARTS FIRST Festival, a weeklong showcase of the best art that Harvard has to offer. Learn more about the Festival from Harvard’s Office for the Arts.

Tickets are on sale now at the Harvard Box Office.