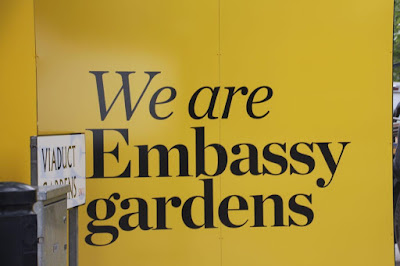 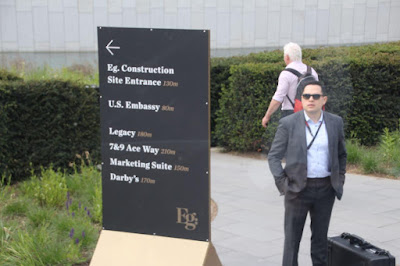 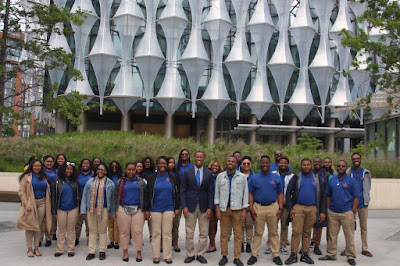 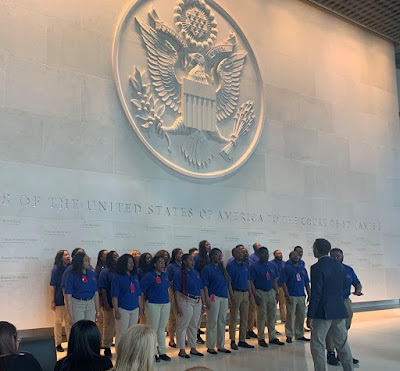 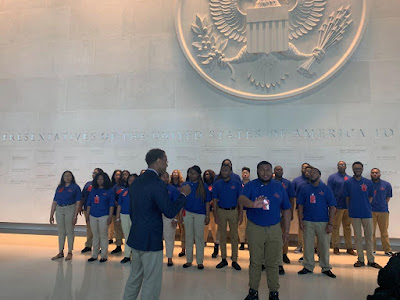 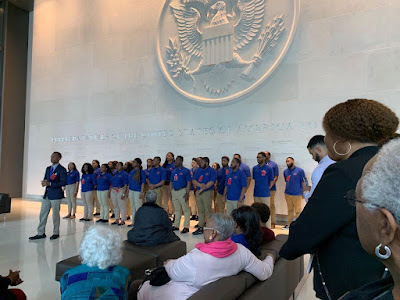 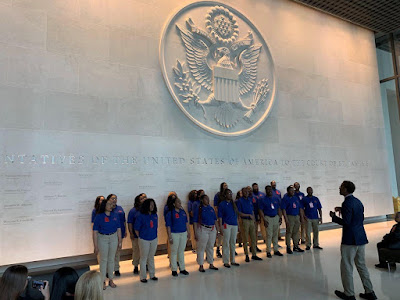 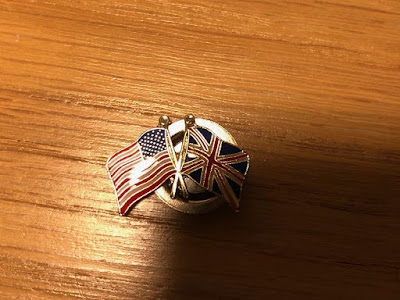 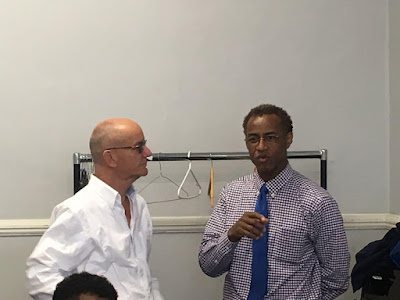 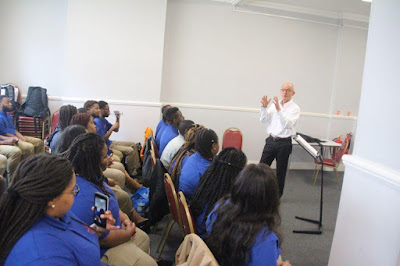 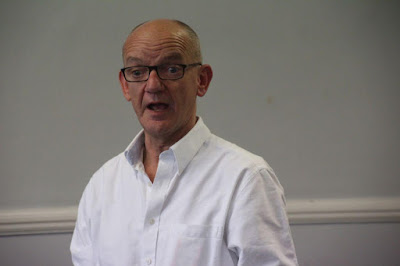 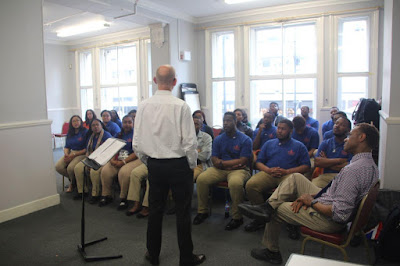 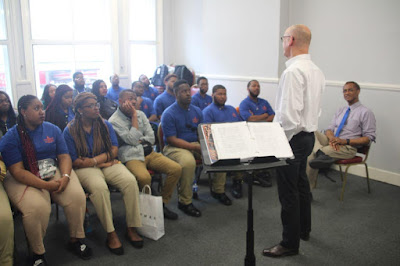 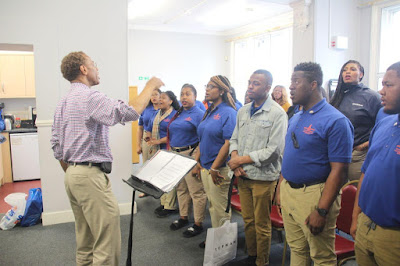 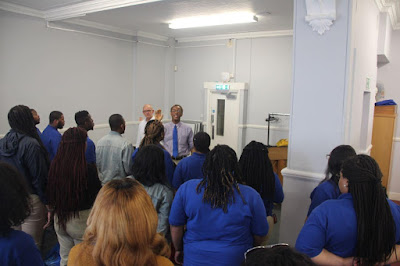 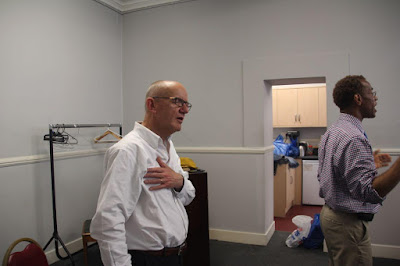 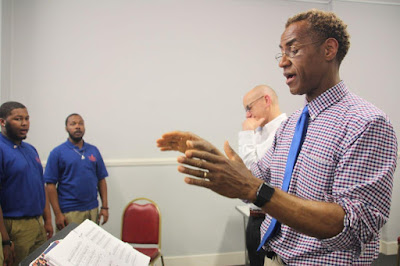 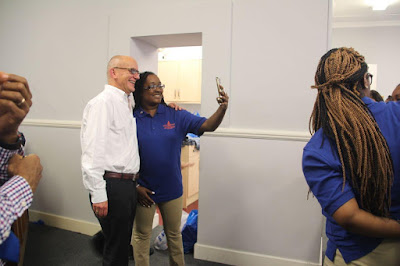 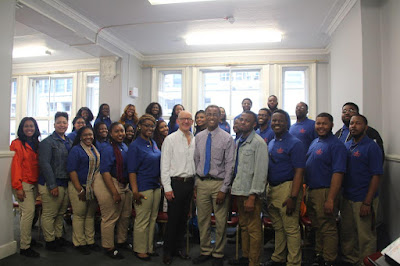 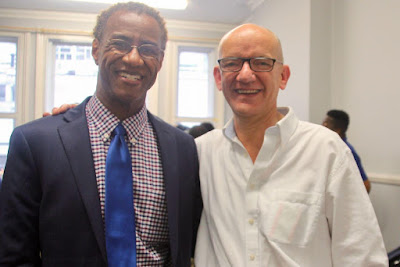 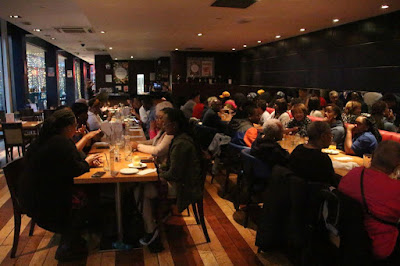 Day 10 was our last full day in London! The first activity of the day was to tour the newly constructed United States Embassy in London. The cost of the structure was a whopping one billion dollars! I was told that the building was not constructed via taxpayers funds, but sales of properties in London, in a very exclusive district. We arrived, and were told that we could not bring any cameras or electronic devices into the facility, however, the embassy photographers would capture our visit. We were greeted by Kim Dubois, one of the embassy’s public affairs officers, who happened to have lived in the Baltimore area, and attended Milford Mill High School. She made us feel very much at home in the embassy, and gave us a personal tour, with detailed descriptions of much of the commissioned art work in the building. Much of the Embassy staff was on high alert as they were preparing for President Trump’s visit in the coming days. Despite this fact, many embassy staff members were on hand to hear our three-song segment. We were given a small reception of tea and biscuits (cookies). All from our group received a gift from the embassy of a US/Great Britain pin, embracing the relationship between the two countries.
After the embassy visit, the group went to the famous Piccadilly shopping area to discover yet another section of this world-class city. While in the Piccadilly area, we felt like we were in New York – Fifth Avenue with many high-end stores on hand. We all went our various ways to either eat lunch or to buy the last souvenirs of the tour.
We then walked to the building where we would have a masterclass with none other than the English acclaimed composer/arranger Bob Chilcott. We arranged to have this session with Bob Chilcott since we were in his home city of London. We chose Chilcott because of his reputation for insightful comments with choirs, but also because we perform much of his music. We performed two of his compositions for him: “Steal Away” and “Londonderry Air”. He was quite complimentary of the sound of the group. He gave some great comments to the choir and me to use in future performances. He reminded us that as beautiful as the sound was, the words are tantamount to telling the story of the compositions. He was the perfect ending to a great week of concerts.
After the masterclass, we went back to the hotel to quickly turnaround for our farewell dinner. We took a ferry across the Thames to the other side of the river, which was no more than five minute ride. We enjoyed a succulent last English meal in a restaurant called Smotzensky’s. Knowing that we were going to have a 4AM wake-up call for our morning flight back to the US, we knew we had to get back to the hotel, right away to pack and make sure that we did not leave any trinkets behind in our hotel rooms. What a great last day in London!
EC
See our performance of Eric Whitacre’s Sleep during the Masterclass below:
Sleep:
https://youtu.be/4EZ1DGEzttQ