In December of 1972, 50 years ago in a little hamlet in Chennai called ‘Chinnamalai’ or Little Mount, the Stop-Gaps Choral Ensemble was born out of a need to assist locals whose livelihood and existence were washed away by torrential rains and perilous floods. A motley band of people from various socio-economic and cultural backgrounds, ages and beliefs, was mobilised into making music to raise funds to alleviate the sufferings of the washermen community who lived on the banks of Adyar river.

Who knew then, that the dedication and perseverance that stemmed out of this endeavour would go on, to further support various charitable causes, and establish a Choir that would lead to opportunities for international recognition, putting India firmly on the global map of choral music, bringing laurels and much acclaim for the country.

The Stop-Gaps Cultural Academy has forged on, over the past 39 years in Mumbai to produce musical events of the highest quality. Its ‘Young Talent’ and ‘Budding Brigade’ concerts and the Annual Children’s Choir Festival ‘Younger Than Springtime’, have spurred on the dedication and drive in young artistes to reach high professional standards and go further on in their careers.

More importantly, it has continued to raise funds and support various social causes and charities such as Mother Teresa’s Missionaries of Charity, The Army Central Welfare Fund for victims of the Kargil conflict, the St. Vincent de Paul’s AIDS hospice, the DCW’s Seniors Citizens Home and in 2019 in aid of Children with Cancer at Tata Memorial Centre, among many others. 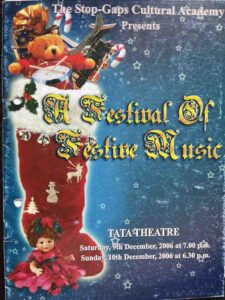 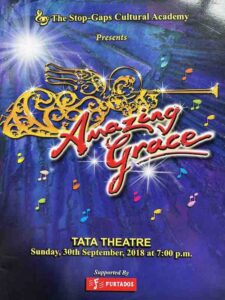 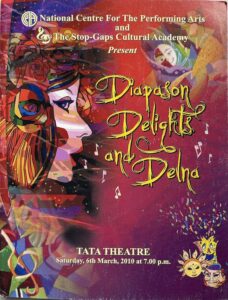 Having established its credentials on the Mumbai music scene, The Stop-Gaps Choral Ensemble went on to enthral audiences in various parts of the world including France, Germany, Italy, Belgium, Northern Ireland – representing India at international choir festivals and competitions, besides prestigious events which included singing at the Vatican for the late Pope John Paul II, participating as India’s representatives at the closing celebrations of Israel’s Independence in December 1998 and performing as well at Manger Square in Bethlehem on Christmas Eve, and is the first Indian choir to have sung in China. 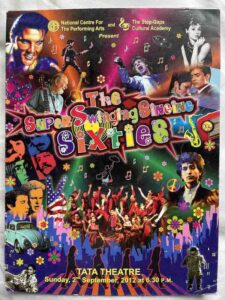 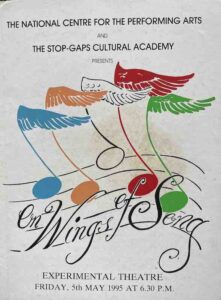 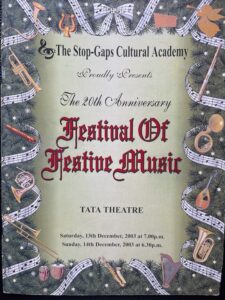 Through international exposure, The Stop-Gaps Choral Ensemble has truly lived up to its motto of “BRIDGING THE WORLD WITH SONG”. What follows is an interview with the greatest showman, Alfred J. D’Souza, Chairman and Music Director of The Stop-Gaps Cultural Academy. Serenade Team: What are some of your fondest memories with Stop-Gaps?

Alfred J. D’Souza: One of the biggest thrills of my life, was singing with The Stop-Gaps Choral Ensemble, at Manger’s Square in Bethlehem on Christmas Eve – a surreal experience to be standing in the very place where something so divine occurred 2000 years ago… the crucible of Bethlehem’s cultural life. Another memory etched for life, is singing at The Vatican, at a Papal audience with the late Pope John Paul II. And of course, my life’s work of forming the Stop-Gaps Choral Ensemble in 1972 and composing my own songs (and actually letting people know that they were my songs) –  their appreciation and faith encouraged me to write at least two Christmas songs every year since then, till today which The Stop-Gaps Choral Ensemble performs at our concerts.

ST: You were committed to going ‘online’ during the pandemic. How has that experience redefined your thoughts and processes?

AJD: The recent COVID epidemic did not deter the Academy from continuing its musical endeavours and though theatres were shut, digital media was employed to reach out to an even wider audience. It was a very unusual experience for The Stop-Gaps; different as it forced us to keep up with our audience and their expectations, in such trying times. It was a lot more taxing and tiring than an actual physical stage show – not to mention, an expensive exercise. But we raised funds through these virtual concerts and the proceeds went towards providing for the needs of Migrant workers during the lockdown, an Environmental Sustainability project in Goa, a Home for the Aged and another for orphaned and destitute children.

ST: What aspirations do you have from the organization for the next 50 years?

AJD: I would love to make ‘The Festival Of Festive Music’, an International choir festival, sometime in the near future, to further promote global choral music in India. I hope to achieve the same for The Stop-Gaps’ Annual Children’s Choir Festival ‘Younger Than Springtime’ – to make it an Global platform, to invite and cross-promote other children’s choral ensembles. My vision for The Stop-Gaps Cultural Academy is to spread its wings wider, into Musical stage productions by children, regular vocal singing Training Workshops for children as well as adults, and to provide opportunities for more cultural exchanges with other choirs and groups.

ST: What can audiences expect from your upcoming concerts?

AJD: High standards of performance as always… a variety of music, styles and genres, fabulous presentation and of course, the perfect platform to showcase talent from across the country. All of it, done with the panache and pizzazz that the Stop-Gaps’ is known for…