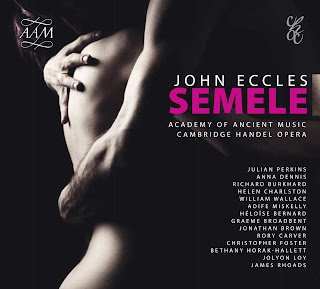 
Reviewed by Robert Hugill on 29 January 2021 Star rating: 5.0 (★★★★★)
Reviving one of the forgotten gems of English opera, this first professional recording of Eccles and Congreve’s drama is revelatory, bringing out the work’s wit, charm and drama

John Eccles’ Semele is one of the great might have beens of English musical history. Written around 1706 by one of the major English composers after Purcell’s death, John Eccles, and arguably the greatest playwright, William Congreve, the work never reached performance, Eccles virtually retired though Congreve was proud enough of his work to print the libretto. Semele would have to wait until the 1960s until its (probable) premiere, until the 21st century for its first recording (from Anthony Rooley and students from Florida State University), and only now in 2021 has the work received its first professional recording.

Opera first came to English shores in a variety of disguises, inspired by the examples from the Continent; when in exile Charles II spent quite a lot of time at his cousin, King Louis XIV’s court and developed a fondness for French music, whilst many of his courtiers would have travelled to Italy. And England, with its burgeoning commercial empire was becoming a magnet for foreign musicians. By the early 1700s there was quite a community of Italian musicians in London, singers and instrumentalists, so it was inevitable that Italian opera would be performed, initially in badly assembled pasticcios. Opera in English, as a sort of sung play, had developed in the mid-17th century, but after 1660 with the re-opening of the playhouses, full sung opera virtually disappeared. The large scale form was dramatick-opera (semi-opera), combining visual spectacular spoken and sung elements, rather closer to the masque than anything else. [read more in my article, The Invention of English Opera]

The two surviving fully sung English operas from the period were short, and both have curious histories. John Blow’s Venus and Adonis was premiered at court but also performed at a ladies’ school. Dido and Aeneas by Blow’s pupil and friend, Purcell, was clearly modelled on Blow’s opera and it was definitely performed at the ladies school though where it was premiered we are uncertain, but it may be at court. What is certain is that neither of these works cause more than a ripple. Purcell did not write another opera, and after his death Dido and Aeneas was split into pieces to be used as incidental music in a play.

But there was a groundswell of interest in full sung opera, aristocrats saw it on the Continent, in French or in Italian, and wanted an English form. A competition was organised, four men (including Eccles) wrote settings of Congreve’s Judgement of Paris. Eccles was thought to be the obvious man to win, but did not. However, he and Congreve planned a new opera, a full length one this time, for the new Queen’s Theatre in the Haymarket which was being built by Vanbrugh. The title role would have been sung by Anne Bracegirdle, a fine singing actress. It never happened, and we are not sure why. In his article in the booklet note, Peter Holman speculates that amongst other problems (the work not being finished in time, the theatre not being ready) we should consider whether there might have been a conspiracy by the Italian musicians in London to keep a closed shop. What is certain is that in 1706 and 1707 there was no performance, and then in 1711 George Frideric Handel appeared like a comet and Rinaldo,  a very different type of music drama, hit London like a storm.

When listening to Eccles’ Semele it is necessary to forget Handel; though the two composers set versions of the same libretto they had very different intentions. As was usual when Handel set an older libretto, recitative was trimmed and space made for large arias, with Handel’s Semele Congreve’s text was reduced and other texts, such as Jupiter’s Where e’er you walk were introduced. Handel’s Semele uses recitative, aria and chorus, and doesn’t worry too much about theatrical necessity; Handel wrote it for concert performance, this was theatre of the mind analagous to his oratorios.

By contrast, Eccles and Congreve created a fluid sung drama which owed more to the English sung plays of the the mid-17th century and was clearly inspired by the Italian operas of the period. This is recitative opera with small arias and musical moments flowing out of the music, but they never impede the action. Here, the drama is all. Eccles’ style is a mixture, much of the instrumental writing sounds Purcellian and some of the vocal writing (Holman in his article brings out the parallels between the scene with Somnus and the Cold Genius scene in Purcell’s King Arthur), but much of the vocal writing is clearly Italian, Cavalli perhaps or more likely someone like Alessandro Scarlatti, whose music was evidently known in London.

But Eccles is not dogmatic, so Italian-style parlando can lead into an English song (strophic rather than da capo). He makes decisions which are entirely different to Handel’s, so that words which are familiar from Handel’s version as an aria, can flash past as recitative or arioso in Eccles. The vocal layout is different too. There is no independent chorus, the boy Cupid is the only cross-dressing role and there is certainly no place for a castrato. There is only one major tenor role (Athamas), with Somnus, Cadmus and Jupiter all being lower voices, and the other tenors are relegated to the supporting roles of priests and augurs. You sense an intelligent mind at work here, knowing that the opera would have to be cast from existing singing actors with, perhaps, a smattering of acting singers from the Chapel Royal.

What we hear here is a performance based on the autograph manuscript which, amazingly, has survived virtually complete. The score uses just strings and continuo (theorbo and harpsichords), whereas the habit in London at the time was to include wind instruments as well. You could argue for a version of Semele with wind instruments, however for this first recording AAM uses just what is given in the score. The manuscript lacks a few bits and pieces (including an overture) and these have been supplied from Eccles’ other works by Richard Platt (1928-2013), whose edition this is from Musica Britannica (published in 2000).

And what of the work?

Well it is delightful; it doesn’t dazzle the way Handel’s does, instead Eccles works to support Congreve’s witty text and it is this fluid combination of music and word which we can enjoy. The singers all bring this out, and apply discreet Italianate ornamentation to create a whole which charms, intrigues and is full of character. Act One flows admirably and despite the same (or more) text as Handel, never gets bogged down in the way Handel does. Eccles and Congreve’s Act One flies by and successfully introduces us to the complex sexual dynamics of the piece – Semele loves Jupiter but is betrothed to Athamas, who loves Semele but is loved by Semele’s sister Ino. These are dynamics entirely invented by Congreve, and this setting makes us enjoy them. For the remaining acts, the way Eccles approaches the text means that Jupiter and Semele’s love feels more natural, you sense that this Jupiter really is in love with Semele (however momentarily).

Anna Dennis makes a delightful Semele, poised with a secure sense of vocal style bringing out the character’s youthful naivety, so that her great aria where she demands Jupiter appear in his full godly guise, is a delightful dance. But our final sight of her is in recitative, with Dennis shaping the line finely yet also giving us a sense of the character’s poignancy.

For much of the opera we see Semele and Jupiter only in relation to each other. and Dennis’ interelationship with Richard Burkhard’s Jupiter is very touching, depicted in two major scenes, in Acts Two and Three. These scenes are very much about the two lovers, and we sense Jupiter’s care from Semele against the mismatched status. In both Act Two and Act Three, their scenes together take the forms of lovely sequences where arias for Burkhard and Dennis, lead to a duet. The construction is all short sections, but the two singers build each scene into terrific set pieces which bring out the very erotic relationship between the two.

Burkhard makes Jupiter a rather moving character overall, his love for Semele clear and without any posing, and Burkhard makes Jupiter’s long final arioso ‘She must a victim fall’ a profoundly emotional experience which crowns a fine portrayal of Jupiter as lover rather than domineering god.

Helen Charlston’s first scene, with Heloise Bernard’s Iris, is remarkably swift which only emphasises the way the opera characterises Juno as vividly and vigorously jealous. Charlston make Juno a characterful whirlwind, carried away by her emotions. The scene with Somnus is a wonderful set piece, whilst her scene as Ino is masterly in the way she manipulates Semele, less the virago and more sophisticated operator. Then finally she gets a long aria, enjoying her revenge and you sense Charlston revelling in the showy passagework for once.

The other characters are strongly taken, Jonathan Brown does not bluster as Cadmus and offers genuine puzzlement at his daughter’s behaviour, whilst William Wallace makes a ardent, stylish and interesting Athamas. Christopher Foster is a delightful Somnus, complete with quite a substantial aria, whilst Aoife Miskelly makes you feel for Ino’s misplaced love. And Bethany Horak-Hallet is charming in Cupid’s short scene. It is Jolyon Loy’s Apollo who finishes things off, after a dramatic recitative for Ino, Cadmus and Athamas. Loy has a lovely tripartite aria, and he certainly is a jolly fellow!

But almost more than any particular character, the piece is about their interaction and the fluid flow of the drama. The whole cast give a stylish account of the music, and really make you appreciate this very different take on Congreve’s text. Words are to the fore, and whilst there is a printed libretto you hardly need it.

Julian Perkins’ has the measure of this music and encourages his singers and performers to ornament and bring out that very particular combination of English and Italian style which this work represents. The orchestra has plenty of little moments to shine as Eccles’ writing is full of symphonies and ritornellos.

The CD booklet is almost a book, and there are articles by Julian Perkins, Stephen Fry, Dr Stephanie Oadie, Dr Ruth Smith, Helen Charlston, Bill Thorp, Judy Tarling, Prof. Peter Holman, Dr Alan Howard, Ivan Day and Alexander Van Ingen on everything from preparing the role of Juno (so very different to Handel) to the use of lead mutes to Eccles’ work as Master of Queen’s Music to Ovid’s original story and more.

I enjoyed this disc immensely, and not just as an antiquarian enterprise. Whatever the qualities of Eccles and Congreve’s opera, this would be an important disc as it illuminates a neglected chapter of English musical history. But what Perkins and his performers bring out is that this Semele is as vivid as a drama as its successor, and they successfully make you forget the Saxon comet and think of that combination of the English and the Italian styles which was peculiar to early 18th century England.

The blog is free, but I’d be delighted if you were to show your appreciation by buying me a coffee.