Bach Mass in B minor; Collegium Vocale Gent, Phillippe Herreweghe; Barbican
Reviewed by Robert Hugill on 14 June 2019 Star rating: 4.5 (★★★★½)
A powerful sense of architecture and a finely unified feel for the detail of the phrasing in this performance of Bach’s late masterwork

Bach’s Mass in B minor and The Art of Fugue are both great late works which seem to have been created for their own sake rather than to fulfil a particular musical function. Whereas with Bach’s Passions we have a relatively clear idea of works’ function, with the two late masterpieces this is far less clear. With the Mass in B minor musicologists still disagree for what occasion, if any, Bach created the work, particularly as at well over 90 minutes running time it is surely too big for a religious occasion. Without a clear function for the work, this means that like The Art of Fugue, we can only guess at the forces needed to perform it.

Each performer is thus able to pick their own way through the maze and choose the forces used. Bach’s music is remarkably robust, I once took part in a performance of Bach’s Mass in B minor with a choir of 200 supported by a large Victorian organ, and Joshua Rifkin famously recorded the work with one singer to a part (which was standard practice in the Lutheran tradition). And, of course, commentators have disagreed also about whether the mass can be regarded as a unified work at all, as Bach assembled it very much as a ‘greatest hits’ synthesis rather than composing it anew. But, whilst on paper the piece might seem unlikely, in performance there is a remarkable unity about the work. 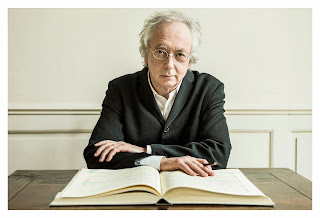 At the Barbican Hall on Friday 14 June 2019, Philippe Herreweghe conducted the Collegium Vocale Gent in Bach’s Mass in B minor performing it with a choir of 18 singers and the ensemble’s own period instrument orchestra numbering 24. The soloists, Dorothee Mields, Hana Blazikova, Alex Potter, Thomas Hobbs and Kresimir Strazanac were all members of the choir. The performance played without an interval, a long sit (nearly 2 hours in the auditorium) but one which gave us a chance to appreciate the architecural sweep of Bach’s conception.

Herreweghe took quite a relaxed view of the work, keeping tempos moving but allowing things to breath and using phrasing and articulation to create urgency. If at times, his approach and phrasing verged on the Romantic, then it was clear also that he and the performers relished the expressive variety of textures which the music can bring on period instruments.

Following the drama of the opening statement of the ‘Kyrie’, the first fugue developed quite discreetly on the instruments with the strings displaying quite a soft grained tone, and a light, oboe-led transparent texture. The vocal statement of the fugue was carefully phrased, in a way which I came to understand was a feature of the ensemble’s performance. And part of the joy of this event was the sheer consistency of the approach and phrasing between singers and instrumentalists. The two sopranos, Dorothee Mields and Hana Blazikova complemented and blended well in a ‘Christe’ which seemed notable for its sense of joy. In the final ‘Kyrie’ Bach reverts to stile antico polyphony, something that re-occurs throughout the mass and each time, Herreweghe and his performers gave the music a lovely rich solidity.

The ‘Gloria’ opened in a crisp and lively fashion, almost dancing with a real sense of enjoyment. In the ‘Laudamus te’, Blazikova’s plangent soprano was paired with a violin solo from Christine Busch who approached the sheaves of notes in a stylish and rhetorical way. For ‘Domine Deus’, Dorothee Mields and Thomas Hobbs stylish duet was paired with the burbling flute of Patrick Beuckels. The soloists all had no difficulties moving between ensemble and solo mode, so that each solo and duet was finely considered and suitably rhetorical, before the performer retreated into the ensemble again. Something that not every performance of this work achieves.  The ensemble made ‘Qui tollis’ almost a slow dance, showing how throughout the work Herreweghe created the architecture of the piece. Alex Potter made ‘Qui sedes’ almost operatic in its intensity in a mesmerising performance paired with the superb solo cor anglais of Marcel Ponseele. But bass soloist Kresimir Strazanac was a little too discreet and could have done with more swagger to cope with the rich, meaty textures from the horn (Bart Cypers), bassoons (Julien Debordes and Carels Cristobal) and violone (Miriam Shalinsky). The movement ended with an invigoratingly brisk ‘Cum sancto spirito’.

The opening of the ‘Credo’ certainly kept moving, with a lively bass line ensuring the articulation over which the singers held strong suspensions. ‘Et in unum’ featured Dorothee Mields and Alex Potter in a strongly rhetorical and neo-operatic duet. The ‘Crucifixus’ was notable for the way Herreweghe emphasised the contrasts in texture, and there was a Magnificat brightness to ‘Et ascendit., which really motored along. For ‘Et in Spiritum Sanctum’ Kresimir Strazanac really sang as if he meant it, his voice set off by the textures of the two oboes and continuo. ‘Et expecto’ was one of the places where Herreweghe’s approach to phrased moved towards the Romantic, and the final chorus was positively toe-tapping.

In the ‘Sanctus’ the performers brought out the sense of contrast between the strong chords and the lighter, faster passages, the ‘Pleni sunt coeli’ really danced and there was great joy, and wonderful rhythmic bounce’ in the ‘Hosanna’. Tenor Thomas Hobbs brought a nice combination of intensity and lyricism to the ‘Benedictus’, his tone strong but flexible and paired with Patrick Beuckels’ beautifully clear flute. Alex Potter made the alto solo in ‘Agnus Dei’ very powerful indeed. He has quite a soft grained tone, and made it very much a slow build, over the steady tread of the bass, towards a climax of real intensity, complemented by the moving final chorus.

This was a performance which certainly did not feel its length, and the degree of detail which Herreweghe and his performers brought to the work, combined with the overall sense of architecture ensured that we were engrossed from beginning to end.