The Belgian conductor Bart Van Reyn has just recorded CPE Bach’s major oratorio Die Auferstehung und Himmelfahrt Jesu, H. 777 (Resurrection and Ascension), with Il Gardellino, Vlaams Radiokoor and soloists Lore Binon soprano, Kieran Carrel tenor and Andreas Wolf baritone (released on Passacaille this month). This is the work’s first major recording in around two decades and it is a piece about which Bart feels passionate. I recently met up with him via Zoom (from Copenhagen where he was assisting at a performance of Wagner’s Parsifal conducted by Adám Fischer; Bart is chief conductor of the Danish Radio Choir which was singing in the opera) to chat about CPE Bach, period performance and more. 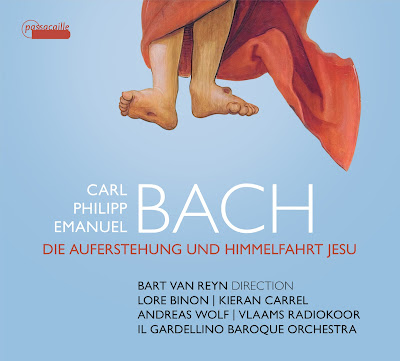 As it was quite a while since CPE Bach’s Die Auferstehung und Himmelfahrt Jesu had a good recording, Bart felt that it was time for the next generation to explore it and give it ‘a fresh coat of paint’. It is rarely performed; the average music lover has probably just about heard of it and the work deserves to be brought to a wider audience. Bart describes CPE Bach’s music as a dark spot for music lovers. It is transitional, between two clear spots; CPE Bach was always searching for things and not every listener is willing to go on his journey.

The quality of the arias is superb. Bart adds that the music in CPE Bach’s other oratorio, Die Israeliten in der Wüste is not nearly as good, whilst the music in his 21 surviving Passions is uneven. Die Auferstehung und Himmelfahrt Jesu is one of the best things he ever wrote, and it is worth recording. Bart points out that it is worthwhile remembering what CPE Bach went through as a boy. He went to the Thomasschule, studied with his father, sang in all of JS Bach’s passions and played in the Collegium Musicum under his father. He was educated by the greatest musician ever.

Carl Philipp Emanuel Bach (1714-1788) was JS Bach’s fifth child and third son, and Telemann was his godfather. He was trained in music almost entirely by his father; in 1738 he took up a post at the court in Berlin and in 1740 became a member of the royal orchestra. He became known as one of the foremost keyboard players in Europe. Finally allowed to leave royal service in 1768, he succeeded Telemann as director of music at Hamburg, and it is from his Hamburg period that Die Auferstehung und Himmelfahrt Jesu dates.

The oratorio was already changing during JS Bach’s lifetime, as Carl Heinrich Graun and Telemann brought it out of the liturgy into the concerto hall. CPE Bach wrote Die Auferstehung und Himmelfahrt Jesu for the concert hall and he assumes the listener knows the story, there is no Evangelist and the libretto is a Biblical paraphrase with contemplation on the story. There is little polyphony and the choir is used far less than it would be in a work by his father.

Bart discovered the work via Philippe Herreweghe‘s recording, made with the Orchestra of the Age of Enlightenment in 1991. One of the strengths of Il Gardellino is the distinctive way of playing, with a sharp edge, flexible and volatile. CPE Bach’s music turns from black to white in a second and it is fun to be able to take sharp corners with the group.

There are two overtures in the work, the tonality is searching, mood-setting and colourful. There are almost no secco-recitatives, most recitatives are accompanied. And CPE Bach takes the recitative to lots of interesting places, his quirky use of keys can sound very modern, and the whole passion story is compressed into a single recitative. His use of solo instruments in the arias is unusual too, one aria uses a solo bassoon and another a solo trumpet.

CPE Bach expected his audiences to be focused and attentive, to be moved by the sudden changes in the music. This was something new, he said the ‘performer himself has to be really moved, otherwise it is impossible to move the audience’.

Die Auferstehung und Himmelfahrt Jesu was performed in 1774, in a private setting, and was premiered in 1778. CPE Bach had discussions with Breitkopf about publishing it, and he had to convince them that it would sell well. As it was published, it travelled; Mozart conducted three performances of the work in Vienna in 1788 with Haydn and Beethoven in the audience. Both were struck by the work and it does seem to lead to Haydn’s Creation in 1799. However, the work was never widely performed and whereas Graun’s oratorio Der Tod Jesu (written in 1755) was extremely popular, CPE Bach realised that Die Auferstehung und Himmelfahrt Jesu would not be.

Few of CPE Bach’s works are on the same level as Die Auferstehung und Himmelfahrt Jesu, and Bart feels that too much low-quality music is being recorded for the sake of it. He feels that life is short, and he would prefer to only do the best quality music.

The choir on the recording is Vlaams Radiokoor of which Bart is the musical director. The ensemble sings a wide range of music from Early to contemporary, and Bart sees that half of the work is in the casting of the singers. In the last few years, there have been lots of retirements amongst choir members, so Bart has renewed around half of the choir members. He prefers voices that are flexible, with a good clear tone, and he loves that he got to choose around half of the singers on the recording. He aimed for a very text-based performance with his singers. For Bart, if you get the key to the text then the tone comes automatically

Bart conducts quite a wide range of repertoire. He does not like to be put in a box, and after all his generation is doing a wider repertoire, even in historically informed performances, than the previous generation. At the moment, he likes to explore concentrating on the range between Schütz and Brahms. Bart feels that you can develop a straight line through the music, and this is a long journey to explore. So many roots for Brahms’ music like in earlier music, you can see where he gets his ideas from.

Bart also likes the fact that you can use your imagination with this music, not everything is written down leaving scope for the performers to use their imagination and fantasy. Whereas in the 20th century, everything is meticulously written down so that the conductor is more of a controller who checks things are done correctly; Early Music gives you more freedom. Bart conducts both modern and period instruments, and when he conducts period instruments it feels natural, like coming home. And every music he conducts is contemporary to him, he tries to think of it as freshly written, uninfluenced by what came later. It is the same with instruments, he tries to find the exact tools and colour palate that the original performers had at their disposal, so you can get closer to the music. When you perform Early Music on modern instruments you can close but not as close as with early instruments.

Bart has got as far as conducting Mendelssohn on period instruments and is looking forward to conducting Anima Eterna Brugge in Brahms and Schumann in Bruges [see the orchestra’s website for details], and this feels like a very natural approach to music history. The closer you get to the 20th century, the smaller the differences get between the sound worlds of the period and modern instruments, and he feels that the turning point occurs around Mendelssohn.

The use of vibrato remains a strong distinguishing factor between modern and period performance. We have testimony from the violinist Joseph Joachim that in 1905, violinists played with a clear pure tone. But performers often do not want to know this, it is an aesthetic that does not appeal to a large part of the world. Personally, Bart prefers no vibrato, except as a colour on a longer note.  He always returns to singing, don’t start with vibrato but bring it in as embellishment so that it leads to a blooming of the tone. Portamento is another bone of contention, and it was already reported in Haydn’s day and Spohr talks about it. Bart sees the question of the use of portamento as important as the use of vibrato. There is a lot to be explored, and much is a matter of taste.

Bart is currently preparing the Brahms Piano Concerto No. 1 that he is to conduct with Anima Eterna, and there are questions over how often to use portamento – how cheesy to make it. There are no real rules, you have to choose and the results can be mannered or amazing.

Next month Bart is conducting Il Gardellino in Handel’s Dixit Dominus and Laudate Pueri, along with Il Pianto di Maria (originally attributed to Handel and now regarded as being by Ferrandini). There are concerts [see the orchestra’s website for details] and a recording, with a cast of fabulous soloists. This is music of a different style, with Italian fire. He will conduct four concerts in Belgium and one in Paris. At the beginning of next season he will be conducting Haydn’s Creation in Brussels (with the Brussels Philharmonic) and in Ljubljana (with the Slovenian Philharmonic)

Never miss out on future posts by following us

The blog is free, but I’d be delighted if you were to show your appreciation by buying me a coffee.